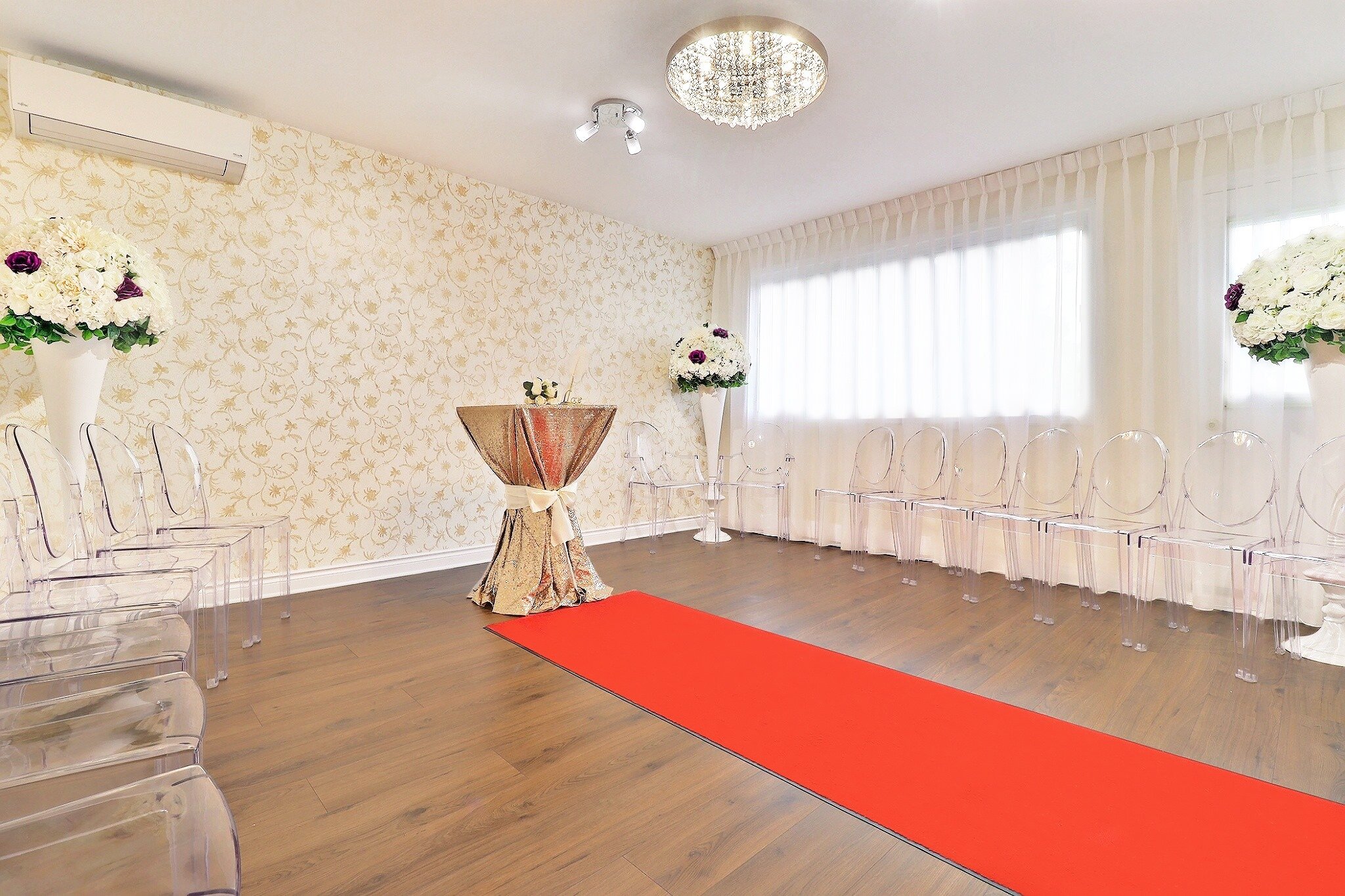 Enjoy the sophistication of the “Imperial” Room for Civil Wedding Celebration in Montreal, and our charming garden. See more photos, by visiting
https://www.notaire-mariage-civil.ca/en/wedding-celebration-hall-montreal/

Marriage in Quebec and other types of union: Choices, implications and procedures

In Quebec, a couple can choose to live in a common-law relationship, marry or join a civil union.

A common-law relationship exists when a couple lives together and starts a family or not. These two people are then common-law spouses, that is to say that they cohabit, without however being married or in a civil united.

The law does not recognize the same rights or responsibilities for common-law spouses as for married or civilly married couples, regardless of the length of their life together.

Civil union is a solemn act by which two people publicly express their free and informed consent to live together and to respect the rights and obligations related to this civil status.

However, unlike marriage, civil union is only valid in Quebec. Consequently, if a couple in a civil union wishes to settle outside of Quebec, it is preferable to consult a legal advisor to protect oneself against the consequences in case of death or breakup.

If you wish to be officially united, you must choose between marriage and civil union. The rights and obligations of both types of unions are the same. However, there are differences in the age requirements and the dissolution process.

Marriage is a solemn act by which two people publicly express their free and informed consent to live together and to respect the rights and obligations related to this civil status, which are conferred by law.

You must make this commitment before your spouse, two witnesses and an authorized officiant. The latter can be:

Civil marriage or civil union in Quebec: what are the similarities and differences?

Marriage and civil union are similar in form and legal scope. However, there are some differences.

Civil union is similar to marriage in many ways.

Similarities between civil union and marriage

Your couple makes a public commitment to live together and to respect the rights and obligations of your union. You must make this commitment before your spouse, two witnesses and an authorized officiant.

– the creation of a family patrimony

– the choice of a matrimonial or civil union regime

– the registration of a declaration of family residence

Thus, the conditions are the same for a civil union with your spouse as they are for a marriage.

Unlike marriage, civil unions are not recognized outside of Quebec.

Legal age of civil union: You and your spouse must be 18 years of age or older.

Conditions for your marriage to be recognized in Quebec

To be recognized, your marriage or civil union is subject to various conditions concerning your spouse and yourself, the preparations, and the conduct of the ceremony.

1) Conditions related to your person

2) Conditions related to the preparation of your wedding in Quebec

Deadlines for getting married in Quebec

3) Conditions related to the celebration

You are free to choose with your spouse where your wedding will be celebrated. In fact, you can marry your spouse, for example:

The officiant must marry you in English or French.

You and your spouse may choose either of these languages. If one of you does not understand them, the officiant will ask you to provide an interpreter.

Role of the witnesses:

If your marriage does not meet all these requirements, anyone who is interested may object to your union or even ask for it to be annulled.

No name changes upon marriage in Quebec

According to the Civil Code of Quebec, each spouse keeps his or her own name after marriage and exercises his or her civil rights under that name. Thus, if a married woman wishes to obtain her husband’s family name, the Registrar of Civil Status will only grant her this name change in exceptional circumstances.

In Quebec, is it possible to have a marriage ceremony with a foreigner (non Canadian and/or non resident)?

Marriage in Quebec and throughout Canada is governed as to its substantive requirements by the federal Civil Marriage Act. The latter does not impose any citizenship or residency requirements for marriage.

It is therefore possible to marry a non-Canadian and/or non-resident.

The non-Canadian and/or non-resident future spouse must provide the same documents as a Canadian, i.e., two valid official pieces of identification with a photo, the original certificate or birth certificate. The document submitted must mention the name of the parents and be written in French or English. If the birth certificate is in a language other than English or French, it must be accompanied by an official translation.

In Quebec, since March 19, 2004, it is possible for same-sex couples to marry. They can also choose civil union to unite.

Thus, in the event of separation or divorce, same-sex couples who are married or in a civil union benefit from the various protections provided for by law, including family patrimony, matrimonial regime, and the right to support in certain cases. The rules applicable to married or civil union couples are the same for everyone, whether they are a same-sex couple or not.

The course of a wedding ceremony

The wedding ceremony can have your distinctive touch to reflect your tastes and beliefs: music, readings, exchange of vows, etc. However, there are some formalities to respect:

The wedding must be celebrated before a competent officiant and in the presence of at least two witnesses.

The officiant must read to the spouses, in front of the witnesses, certain articles of the Civil Code of Quebec on the rights and obligations of spouses. The reading must be done in French or English. If one of the spouses does not understand either of these two languages, they must request the services of an interpreter at their expense. This interpreter cannot be a member of their immediate family.

After the reading of these articles, the officiant receives the exchange of consent of the spouses, which must also be done in French or English, and declares them united in marriage.

Regardless of the location (as long as it respects the solemnity of the ceremony), the date and the scenario, the civil marriage officiant has the same mission: to receive your free and informed consent to live together with your spouse and to ensure that all formalities prescribed by law are respected.

Choosing a notary as your civil marriage officiant has its advantages depending on what you are looking for. If you are looking for personalized legal advice, choosing a notary to perform your marriage will provide you with personalized legal advice on matrimonial regimes and the legal consequences of your wedding. Other types of civil marriage officiants, such as court clerks or family members, cannot provide you with this type of expert advice. If your situation requires it, the notary can also draw up a marriage contract for you.

The officiating notary is also more flexible as to the date of the celebration compared to the hours and days when a clerk can marry you at the courthouse.

Finally, if you wish to get married quickly, in as little as 21 days, choosing a notary as your civil marriage officiant is a wise choice.

A notary like Me Lincà wedding officiant, marriage officiant, has many years of experience in the celebration of civil marriages in Quebec. He has married thousands of couples and his experience counts for a lot in the service he offers you. Have your civil wedding celebrated by an experienced officiant who will offer you a personalized and complete service, as well as two ceremony rooms and a garden courtyard with flowers in all seasons, in Montreal, Quebec. So that this day, just like your love, leaves an imperishable memory. 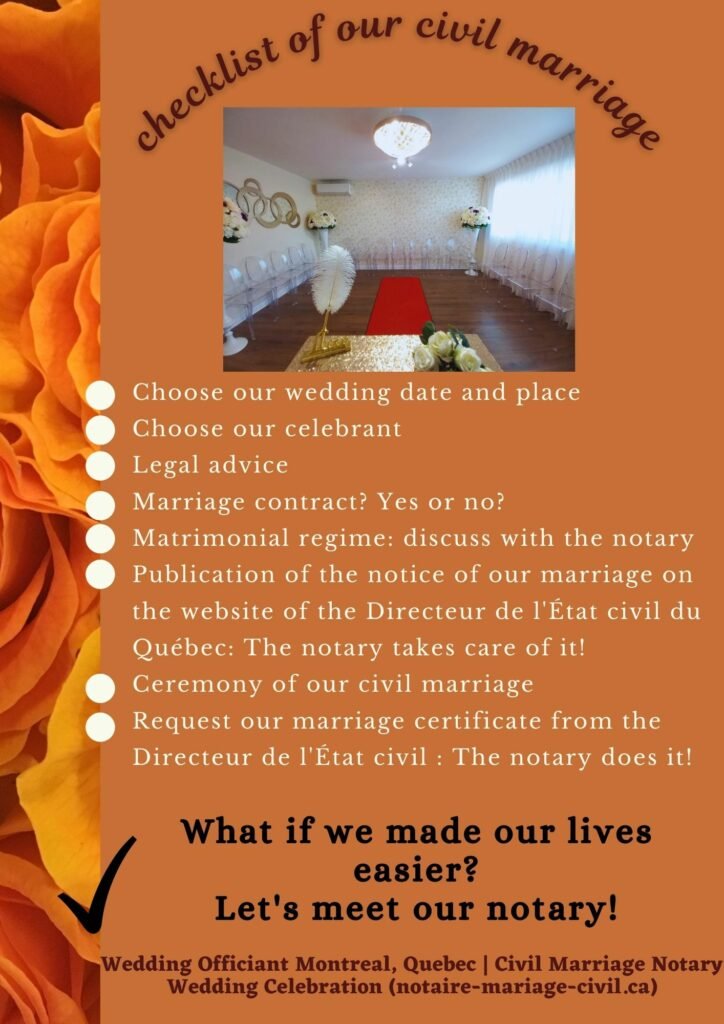